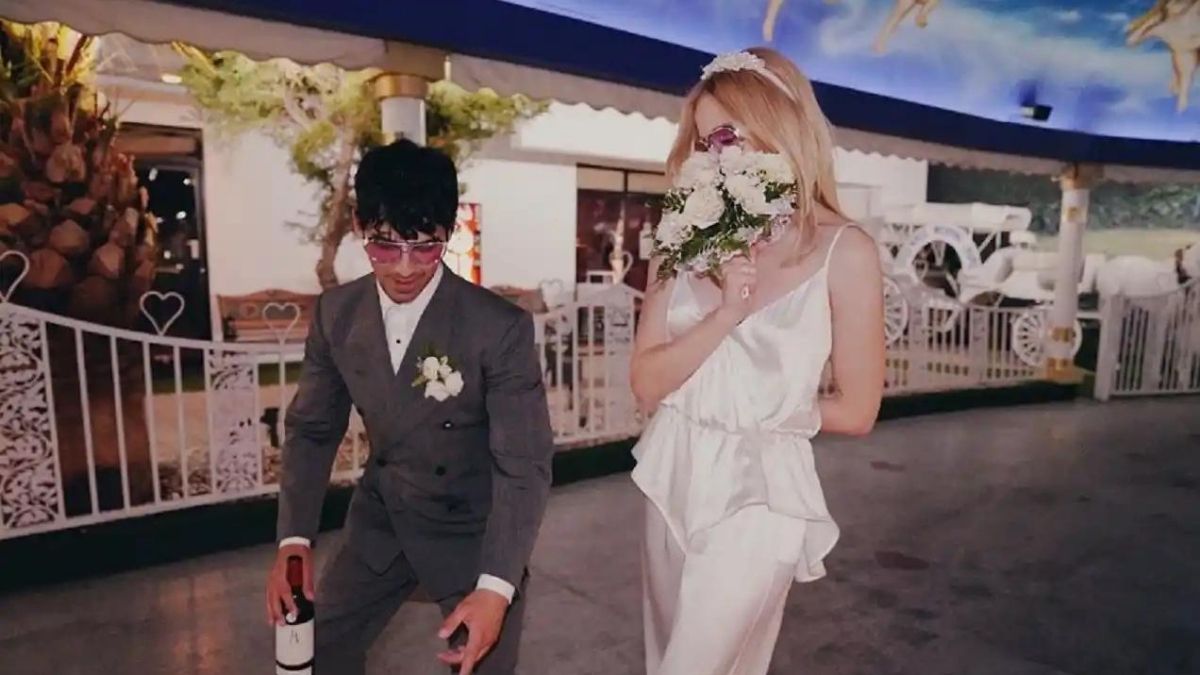 A guitar-playing Elvis Presley impersonator officiated the couple’s wedding in the Graceland chapel in Las Vegas.

“In a beautiful ceremony lit by the ashen skies courtesy of a burning state miles away in the midst of a global pandemic, the people’s princess wed her devoted, low-born but kind credit-card holder in a wedding officiated by the king himself,” American actor Harbour wrote of the nuptials in a tongue-in-cheek Instagram post.

“Refreshments were served at,” writes Harbour, referring to the burger.

Sophie Turner, 26, and musician Joe Jonas, 32, were lawfully married in May 2019 at A Little White Chapel in Las Vegas. They held a magnificent wedding party with family and friends in the South of France the following June.

Joe’s siblings Nick and Kevin Jonas, as well as their wives Priyanka Chopra Jonas and Danielle Jonas, attended the wedding, which took place after the 2019 Billboard Music Awards.
“It’s difficult to preserve secrets when people are live streaming it,” Turner remarked. “It would have been great if no one had known, but I thought it was hilarious.”

On February 16, 2021, Nicolas Cage, 58, married 28-year-old Japanese actress Riko Shibata in Las Vegas. The wedding was described as a “very small and intimate ceremony at the Wynn Hotel in Las Vegas” by a spokeswoman for Cage.

“The date was picked to commemorate the groom’s late father’s birthday.”

They met on the set of Prisoners of the Ghostland in 2019 and got engaged through video chat in the middle of the pandemic.

“We’re incredibly happy together and we’re really excited to spend that time together,” Cage stated on Marc Coppola’s radio show. “So, I finally just said, ‘Look, I want to marry you,’ and we got engaged on FaceTime.” Cage’s brother is Coppola.

The wedding of Cage and Shibata was neither his first nor his first in Las Vegas.

The make-up artist’s marriage lasted barely a few days, and Cage filed for annulment four days after the ceremony.

“I acted on impulse and without the ability to recognise or grasp the full impact of my actions,” Cage said of the wedding. In June of this year, the divorce was finalised.

The marriage was only valid for 55 hours until it was called off.

The annulment petition stated that “Plaintiff Spears lacked knowledge of her acts to the extent that she was incapable of agreeing to the marriage.”

After that, Spears married Federline, with whom she has two sons: Sean Preston Federline, 16, and Jayden James Federline, 15. In 2007, the couple divorced