The ‘Hey Mama’ singer has taken to Instagram to share a glimpse about her chat with Zane Lowe, on her latest album ‘Better Mistakes’.

The ‘Hey Mama’ singer has taken to Instagram on May 11, to share glimpses of her recent appearance, in a chat with Zane Lowe, on her latest release ‘Better Mistakes’.

Sharing a couple of stories, Rexha is seen giving out details about the album and promoting her chat with ‘Apple Music’, allowing the viewers to swipe up on her story if they haven’t yet to know more about the same.

Rexha looks stunning in her blonde long hair, with cute fringes, dressed in a full-sleeved shirt, with grey and white patterns all over.

With pink acrylic nails and several finger rings, that are her go-to everyday jewelry, she makes a lot of hand gestures while talking. 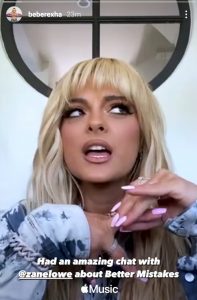 The first story is captioned as, “Had an amazing chat with Zane Lowe about Better Mistakes”, tagging Zane.

While tagging ‘Apple Music’ in the second one, Rexha has captioned it as, ” Swipe up to check it out on Apple Music”.

In conversation with Zane Lowe, Rexha talks about how the songs of her album ‘Better Mistakes’ have brought out the real, raw and vulnerable parts of her, in a platter, for the viewers and her fans to know her better.

She also shares that the album made her feel empty and sabotaged in certain ways and makes her ponder on who she is.

Rexha adds that although it makes her feel that way, it isn’t in a victimizing or a reflecting way, rather in an accepting way of having learnt to accept who she really is and that she has already been through the phase of self discovery in the past.