Grey’s Anatomy: Here are the Top 10 bizarre cases, too hard to comprehend

Fictional shows are often far from reality. At times some aspects of the shows are hard to digest. Here are the most bizarre cases from Grey’s Anatomy that remain unforgettable. 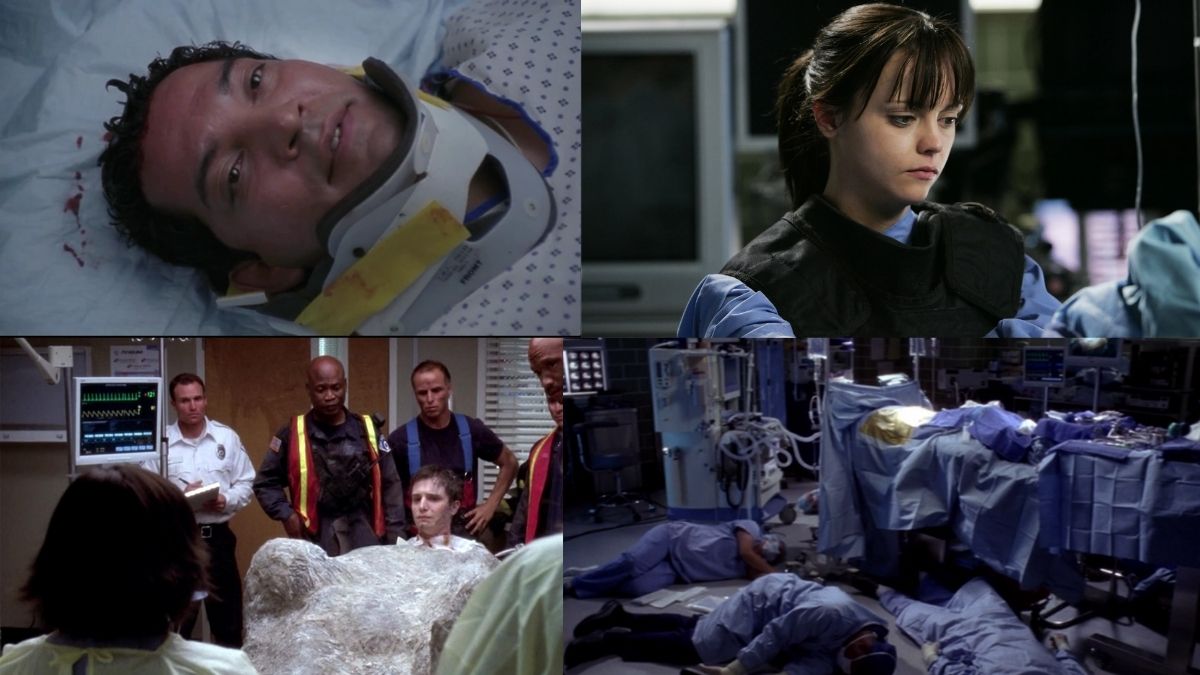 Grey’s Anatomy is an ongoing American medical television series that has been airing since 2005. The series focuses on the personal and professional lives of the doctors of Seattle Grace Hospital as they strive to maintain a balance between the two.
Being a fictional show, it does not often depict the actual lives of the surgeons.
Here is a list of some of the weirdest cases from the show. 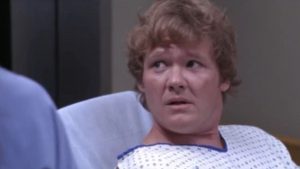 In Season 2, Episode 2, a guy named R. Hubble, who was a patient of Meredith complained about bowel obstruction.
On asking about he swallowed, Hubble remained silent causing the doctors to believe it was drugs. The doctors did an X-ray and saw what looked like 10 drug balloons.
Alex Karev pointed out that one of the balloons had a face. This made Miranda Bailey conclude that he swallowed 10 Judy doll heads. They performed surgery and removed each head one by one.

2.The man with a fish in his penis 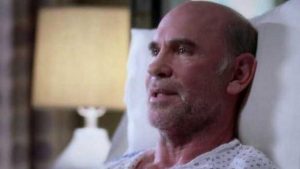 Larry Jennings was the chairman of the board of directors of Seattle Grace Hospital. In Season 3, Episode 21, he went for a vacation in Amazon but he had to come back early as he was unable to urinate for three days.
The case was assigned to Dr. Fischer. He placed a suprapubic catheter to drain the bladder and then performed an X-ray. The x-ray showed a skeleton in his penis. Dr. Fischer concluded that it was candiru fish, which is known for lodging itself in the urethra.
Later, Dr. Fischer performed surgery to remove the fish.

3.The guy with a bomb in his body 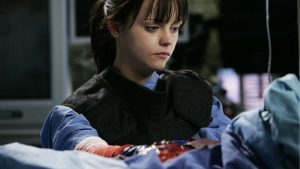 James Carlson was the patient in Season 2, Episode 16 with a bomb in his chest cavity. Hannah Davies puts her hand inside him to stop the bleeding. They soon realized that her hand was holding the ammunition in place and asked her not to remove her hand. Eventually, she soon removed her hand but Meredith quickly replaced Hannah’s hand with her own.
Later on, the surgery was performed and James Carlson ended up surviving.

4. The girl who couldn’t feel pain 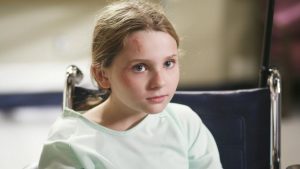 Megan Clover was a girl who was bought to the hospital by her foster parents when she fell on the playground and cut her leg open. On examining her Alex found some staples closing the wound. He asked her foster parents if they have done it but they replied that she did it herself. Megan told her they don’t hurt her nothing hurts her. She removed her staples by herself and when Alex asked her if that hurt she replied that it didn’t.
Alex went over the whole thing with Bailey and she suggested doing a cold pressure test to see her reaction to pain. He went ahead with the idea and put both his and Megan’s hand in ice water. When it became intolerable for Alex he removed his hands but seeing the whole thing did not affect Megan the slightest he removed her hands too.
After conducting CT, Alex found various internal injuries. Adisson suspected Megan had CIPA which made her insensitive to pain.
They conducted some tests to confirm the condition and later performed the surgery.

5.The woman who had worms breeding inside her 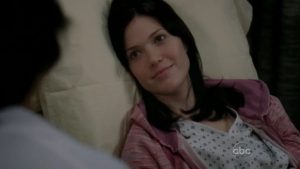 In Season 13, Episode 21, Dennis, the boyfriend of Mary Parkman, made her breakfast one morning. But after that, she suffered from severe abdominal pain so he took Mary to the hospital.
After conducting a barium swallow study, they believed it to be a bowel obstruction. But soon April found a worm in Mary’s vomit. It turned out that she had an intestinal roundworm and needed surgery. The surgery went successful.

6.The man who shot nails into his head 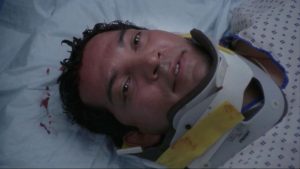 In Season 1, Episode 4, Jorge Cruz ends up falling down the stairs with a nail gun in his hand which resulted in several nails getting embedded in his head.
He was taken to the hospital and his wife informed the doctors that he has been having dizziness and headaches for the past few days.
Derek removed the nails and his sight returned which earlier got affected because of the nails. He further looked for the cause of dizziness and found a tumor on his hypothalamus.

7. The patient with the toxic blood 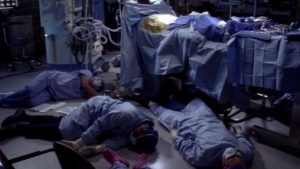 In Season 3, Episode 14, Marina Wagner woke up barely breathing and was brought to the hospital. She had a large tumor removed from her colon eight months earlier.
While George was taking Marina’s blood he started shaking and when to the clinic to lie down. Later, Olivia also ended up in the clinic which made George conclude that Marina’s blood was toxic because of the chemo drugs and herbal supplements.
During the time Marina was already in the operating room for a bowel resection which caused the staff in the operating room to collapse.
To complete the surgery they borrowed the ortho suits. She was then taken to the ICU for special dialysis to remove the toxins after the interns had given a temporary closure to her abdomen.

8. The man with a tree in his lungs 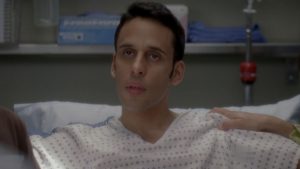 In Season 7, Episode 21, Raul Aranda came to the emergency room after coughing up blood. Cristina took him into bronchoscopy where she found out that had a tree growing in his lung. He had earlier seen three other doctors for the cough but Cristina ended up giving the right diagnosis.
Later, Cristina took him into surgery and removed the foreign object.

9. The boy who swallowed 21 monopoly pieces 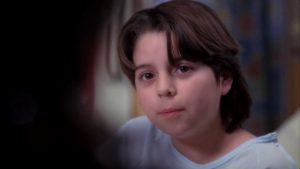 During season 3, Episode 7, a boy named Eric Sanborn swallowed 21 monopoly pieces when his older brother did not allow Eric to play monopoly with his friends. Eric ended up swallowing the monopoly pieces to prevent anyone from playing. He thought to himself that his mother would make his older brother let him play with them.
While waiting for the pieces to pass, Eric ended up vomiting up blood and was taken to the hospital.
The surgery took place to repair the perforation in his digestive tract.

10.The guy who got submerged in concrete 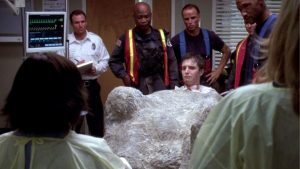 In Season 4, Episode 16, Andrew Langston, a 19-year-old boy was hanging out at a construction site with his friends. His friends dared him to jump into a vat of cement. To impress his friend Lola, he lies in the concrete but the wet cement starts to dry causing him to get stuck.
He was taken to the hospital. Mark puts vinegar on his skin to minimize the burning.
Soon they start removing the concrete till only one chunk is left. They eventually removed the large chunk and rushed him into the surgery. The surgery turned out to be a success. After the surgery ended Lola came to visit him and kissed him.

Wolcott Police searches for armed suspect after shooting at I-84