Meals from all around the Indian subcontinent are high in nutrients, making them healthful choices.

Indian food has given the world many culinary greats, and it has influenced my own kitchen in particular. There’s a wide range of foods available, from meat-based curries to vegetarian and vegan options, as well as a variety of spices and ingredients that give each dish its distinct flavour profile. Indian cuisine’s ingredients and cooking methods vary by geography, season, religion, and family tradition.

However, the cuisine isn’t only about flavor; meals from all around the Indian subcontinent are high in nutrients, making them healthful choices.

Take a look at a few healthy yet delicious Indian dishes to add to your meal plans. 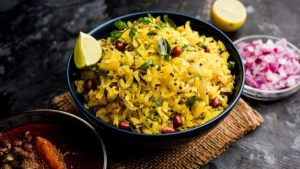 Poha is a traditional Indian morning meal composed of flaking rice that has been flattened and soaked in water before being tempered with onions and a variety of spices. It has a lovely texture when covered with peanuts and peas.

These additions improve the dish’s nutritional value by adding calcium and iron, as well as fibre and protein, which may help you feel fuller for longer. 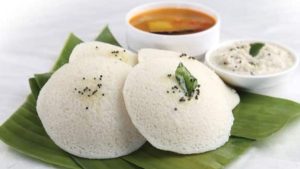 Idlis, which are light and fluffy, are ideal breakfast foods. With sambhar or chutney, this classic South Indian dish can be relished. Idlis are traditionally made with rice flour, but you can make them even healthier by using ragi or oat flour instead.

Idli come in a variety of shapes and sizes, including Rava idli, which is made from semolina. The Konkan sanna is one of the regional varieties. 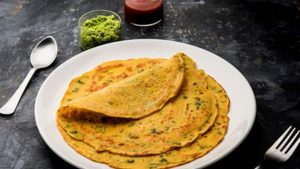 Chillas are a delicious Indian delicacy that resembles pancakes in appearance and are popularly eaten as a breakfast meal. Spices have been added, and they’re eaten with Indian pickles, sour cream, or plain yogurt. Chillas can be topped with chopped cucumbers and tomatoes, but they’re delicious on their own as well.

Chillas are often made with chickpea flour (besan). However, sprouted mung beans can also be used.

Chickpeas are cooked in a spiced tomato sauce in Chole masala, an Indian meal. It goes well with roti, bhatura, and naan. It is usually eaten for lunch or dinner.

Chickpeas are high in heart-healthy fiber, as well as a variety of vitamins and minerals. 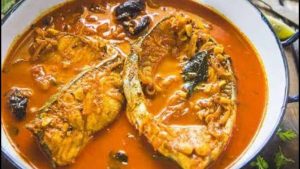 Alleppey fish curry is a classic Indian meal with sweet and sour flavours made with soft fish, zesty spices, and creamy coconut milk. It hails from the Alleppey District of Kerala, India, which is noted for its delectable, fragrant fish curries. Indian mackerel, or kingfish, is the most common fish, and it’s usually flavoured with tamarind or green mangoes. 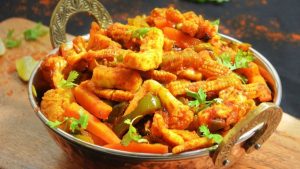 Jalfrezi, a curry-like stir-fry with various variations, captures the fragrant spices and tastes of India. Cooks all across the world have created their own versions of this dish.

Jalfrezi is a spicy Indian dish that includes chicken or shrimp, as well as bell peppers, onions, and tomatoes. While ginger adds a fragrant note, cloves, cumin, and chilies give it a spicy kick that makes your mouth water with each bite. 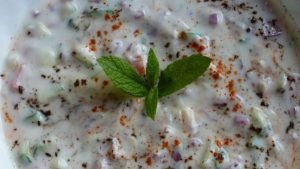 Raita is a traditional Indian side dish comprised of dahi (yogurt/curd) with raw or cooked vegetables.

In western cuisine, the closest approximation is a side dish or dip, or a prepared salad.  Coriander, roasted cumin seeds, mint, cayenne pepper, chaat masala, and other herbs and spices can be added to the yogurt.

While Raita can be eaten solely, it is usually paired with rice dishes. It is one of the easiest and quickest meals to make.

This side dish is served cold. When eating hot Indian foods, raita can be helpful to settle your stomach. 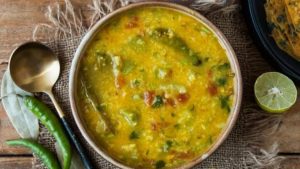 Dal is a fragrant lentil curry flavoured with cumin, turmeric, cinnamon, garam masala, and other spices. It is perhaps the heartiest of Indian dishes.

Toor dal, masoor dal, and chana daal are some of the lentils that can be used to make daal. It’s usually served with rice, naan, or roti. It can be eaten as a soup or paired with Indian veggies and meals. Dal can be a huge source of high-protein for vegetarians.