That Gigi Hadid and Vanessa Bryant are great pals is not unknown! They send each other gifts to show love on Christmas and other special occasions. Well, Gigi received a pair of Nike sneakers from her today as well and was quick to show gratitude on her Instagram story! Here’s how she accomplished that: 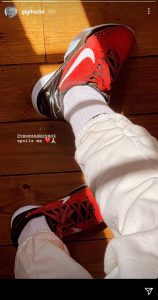 Vanessa Bryant had announced her plans to collaborate with Nike after the sudden and unfortunate passing of her husband Kobe Bryant led to the signature Kobe’s running out of stock, leaving fans disappointed over the inability to obtain the sneakers to cherish his NBA star’s memory. Ever since she’s sent out Nike sneakers as presents to her close celebrity friends.

We must say..we’re filled with envy, aren’t we?!

Vedanshee Narshana is a Humanities student from Mumbai. An avid reader and a passionate writer, she loves to express herself through words and art. She can be reached at [email protected]

Khloe Kardashian spreads awareness on the importance of self care; Check it out