Not just once or twice have the singer saved the lives of shelterless puppies.

Always watching out for those in need, Selena is already a mum of 8.

Selena Marie Gomez, Aka Selena Gomez, has a story to tell on why she never minds to call in another stray. The American singer, actress, and producer originally from Texas says “In Texas, where we’re from, there are a lot of dogs that needs homes…It just never made sense to any of us not to get a shelter dog, since there are so many that need homes,” to PEOPLEPets.com. 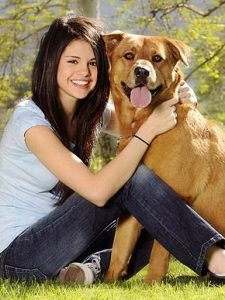 Wallace is an 8-year-old boxer-shepherd mix who was adopted from a shelter and since then, Selena had worked hard on helping him recover from parvo. Today, he is as happy as any dog can ever be.

Secondly, Willie. The Labrador-retriever mix was found by her stepfather in their neighbor’s place. They had left it back. Her stepdad had taken him to a shelter after finding him run loose. “They called 10 days later and said they were going to euthanize him… so we took him home,” says the singer. He is the biggest of the pack and is the gentle hard who keeps to himself.

Next on the list is Chazz.  He is a 2-year-old mysterious “Puerto Rican breed,” according to Gomez. She found him sitting alone on the sets of the Wizards of Waverly Place movie in Puerto Rico.

Next, in 2011, she had adopted Baylor while on a trip with Justin Beiber. Away from her canine friend the singer had decided to adopt Baylor. 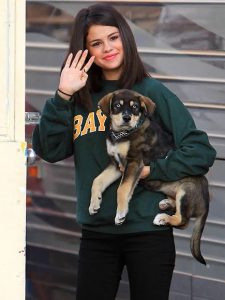 Fifth being Fina was actually found by Selena’s mom. As her mom found out the skinny poor thing in need of medical attention in a parking lot, she had taken her off to a Vet. Now the pup is an official member of the Selena Pooch Force.

Chip is a 7-year-old corgi mix, whom she got from a rescue organization. “Chip is a lover…He just wants to be loved. It doesn’t matter who you are,” says Selena. 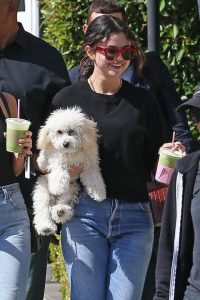 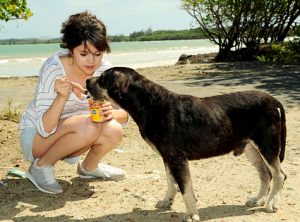 It was in a recent tweet she had shown of her new friend,  Daisy. Along with Daisy is Winnie, who she got last year. The singer has been active in taking care of her pets during the pandemic.

Selena with Winnie and Daisy pic.twitter.com/Md6HVnOWLx

With many celebrities like Gomez putting themselves as examples of protecting the most loyal and adorable creatures on this planet, it puts minds to rest that the world has not yet lost all hope.