Watch out for these Top 10 Romcoms, when you wish for more like ‘To All The Boys’ movies

There are plenty of reasons, why the ‘TATB’ franchise became a superhit quite soon post it’s release. To all the teen romance lovers and hopeless romantics out there, we’ve got you covered if you’ve been craving for more such romcoms.

It seems that people’s tastes in OTT movies and series are turning towards teen romance comedies, that involve juicy romance and love drama between two high school students.

It is no doubt why Noah Centineo and Lana Condor’s ‘To All The Boys’ romcom franchise has successfully completed three movies superhit movies.

For all the hopeless romantics and romance lovers out there, if you’ve watched and loved Noah as Peter Kavinsky and just can’t get enough of his chemistry with Lara Jean, then here are some very popular romcoms just like ‘TATB’ movies, that are sure to get you swooning and find yourselves relate to the characters, as they struggle to survive in high school while finding unexpected love and friendships on the way.

With two movies already released and extremely successful, the third one is on it’s way to roll out anytime soon.

It follows the journey of an awkward highschooler named Elle, played by Joey King, who falls in love with her best friend Lee’s brother, the popular bad boy at school, Noah, played by Jacob Elordi. 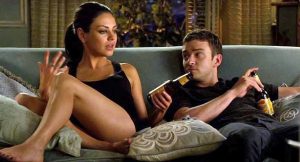 As the title suggests, the two ‘FWB’ involved here are played by Mila Kunis and Justin Timberlake, as the story revolves around their complicated bond involving both friendship and sex lives. It is all about how their bond as friends transitions, after they get together for sexual needs.

If you are high on Noah Centineo, and just can’t get enough of Peter Kavinsky, then here’s another one of his great romcom, that’ll keep you swooning.

Just like all, Noah plays a high school student, who works hard to pay off his academic expenses as he doesn’t hail from a very well to do family.

He’s struck with a surprising idea one day, to sell himself online, for fake dates, changing his personalities and profiles according to the girls’ preferences, when he ends up falling for one of pretty and rich dates.

#4 Sierra Burgess Is A Loser

Another one of Noah’s amazing romcom, this one revolves around the troubled life of an awkward teenager, who struggles to be something more than a loser, that she isn’t really though!

With a fake identify of her cheerleader high school classmate, she starts conversing with a football quarterback, who studies at the same school.

It later follows the journey of how online chat leads to romance in real life, when Sierra falls in love with the boy and he in turn falls for her voice, thinking it to belong to someone else, only to later develop feelings for Sierra.

Being a little different than the usual romcoms in this list, this one’s a teen LGBTQ romantic comedy, that was a first major film of it’s kind, that opened people’s mindsets and gave them the opportunity to explore more about this not so unusual genre.

It is all about the protagonist, Simon, played by Nick Robinson, who is a gay high school student and falls in love with a random classmate that he’s been emailing for quite a long time.

Another one from the now popular LGBTQ teen romance comedy, this one revolves around a highschooler named Ellie, played by Leah Lewis, who has a secret crush on a popular classmate named Aster.

As Ellie does her classmates’ homeworks for making a great business out of it, she is suggested by her footballer friend to write up some love letters for Aster, after which they get into an unexpected friendship.

A genius adaptation of the novel ‘The Scarlet Letter’, featuring Emma Stone in the lead, named Olive, who fakes her identify to be that of a promiscuous girl, with a motive to grab attention and be popular at her high school, which unfortunately turns to a wrong direction, just like how Lara Jean faked her relationship even when she truly felt for Kavinsky.

#8 The Edge Of Seventeen

Well, the protagonist in this one is quite relatable to Lara Jean, as they both deal with the pressure to survive in a high school, in an attempt to make their own marks.

Nadine, played by Hailee Steinfield, goes through a romance crisis, as she desperately tries to get herself hooked onto a guy, when her popular elder brother gets into a relationship with her best friend, played by Haley Lu Richardson.

An epic classic loved by the lady herself, Lara Jean confessed this one to be her favourite romcom, right in the very first ‘TATB’ franchise.

Get to know more about Lara’s approach to the world via this romantic comedy, that makes for a great watch, despite of it containing some racial and homophobic content.

This brilliant adaptation of Jane Austen’s classic novel of the same name, released in 2005, deserves to be here, as Lara Jean can be seen spending most of her time during the third ‘TATB’ franchise, binging on this book.

This one has nothing but pure chemistry and romantic drama, between two lovers Elizabeth Bennet, played by Keira Knightley, and Mr. Darcy, played by Matthew Macfadyen.